Scroll to next section

Riding high on the success of the previous collaborations, Heschung is once again joining forces with De Bonne Facture. From 7 April to 7 May the brand’s founder, Déborah Neuberg, will set up shop in the Heschung showroom with her new collection on sale. Socially-responsible and a champion of the know-how of French ateliers, she shares the values dear to Heschung. We talked with the socially-engaged entrepreneur who knows what she wants.

Why did you choose fashion?
I have always loved fashion. As a young girl I loved watching the runway shows. I was completely mesmerised. I remember never missing the Yves Saint Laurent shows. The year I turned 15 I already knew that I wanted to be a designer so I prepared to apply to Central Saint Martins School, but my parents steered me down a more academic path. So I did a preparatory course and then entered a business school (HEC), but whenever there was an internship to do, I applied to the fashion industry!

Is there a particular internship which stands out?
At the age of 20 I did an internship in a boutique in the 6th arrondissement of Paris. The manager had great taste and made clothes in her workshop in the 17th arrondissement. That is where I started to take a keen interest in how garments were made.

What led you to create De Bonne Facture?
After several really great positions with well-known brands I had one ambition, to set up my own. For me, the common factor I took from all these experiences was a need for transparency about sourcing. I really set out to create a label rather than a brand. I wanted something unique, an approach that would place importance on being able to trace the origin of the garments.

How did you go about it?
I began to seek out ateliers of interest and I contacted them. The first was Fileuse D’Arvor. After I had presented my project I asked them if I could visit their factory, Two days later I was there and the rest is history. I took the same approach with all the other aspects of the business: knitted fabrics, jersey, buttons etc.

As my research progressed, I began to realise that I had all the designs in my head and that was when De Bonne Facture the brand was born.

Why do you manufacture in France?
To keep traditions alive. It seemed logical to me to look for a Breton artisan to make a Breton pullover. I wanted to use the age-old methods give new life to existing know-how. I selected the workshops based on their location and speciality. I could quite easily go to Scotland if I wanted to have garments made from Lisle yarn, for instance.

How did you launch?
I began with just a few individual pieces of one full outfit: a shirt, trousers, jacket and a tie. There was a gallery in Rue du vertbois, in the 3rd arrondissement of Paris, where the owner held exhibitions related exclusively to manufacturing. He offered me space to exhibit my first collection. This was in January 2013. I had kept my contact book up in good order so I contacted a few buyers from Printemps, Bon Marché, Merci, etc. and they all came to view the collection.

What happened next?
Printemps offered me a pop-up shop in their store in late 2013.

My encounter with Pierre Heschung and the whole team at the Pitti Uomo trade show in June 2013 was instrumental in our first collaboration in November of the same year, to coincide with the opening of the Vieux Colombier boutique. We created exclusive De Bonne Facture pieces – two sweaters and two shirts – for Heschung.

What values does your brand embody?
Simplicity, quality, close ties with the workshops, the French touch, laid-back elegance and authenticity.

Above all I want people to buy with a conscience. Whether it’s from us or from a fashion multinational, they need to think carefully about what they are buying.

Why should we buy French?
I’m not forcing anyone to buy French. I’m not part of that movement. I do not judge people on their buying preferences and have nothing against those who decide to by other things, But I want them to make a conscious buying decision and know where their clothes are coming from. When you buy a product, it goes without saying that you are supporting a particular channel of production.

How would you define your style?
It’s very difficult to define your own style. I like clean lines and a laidback style. I like timeless contemporary pieces. I like to make menswear classics, the tailored jacket or blouson jacket for instance, from traditional fabrics.

What’s your perfect outfit?
One that I wear a lot at the moment: men’s trousers in Super 120 flannel with a man’s navy blue sweater. 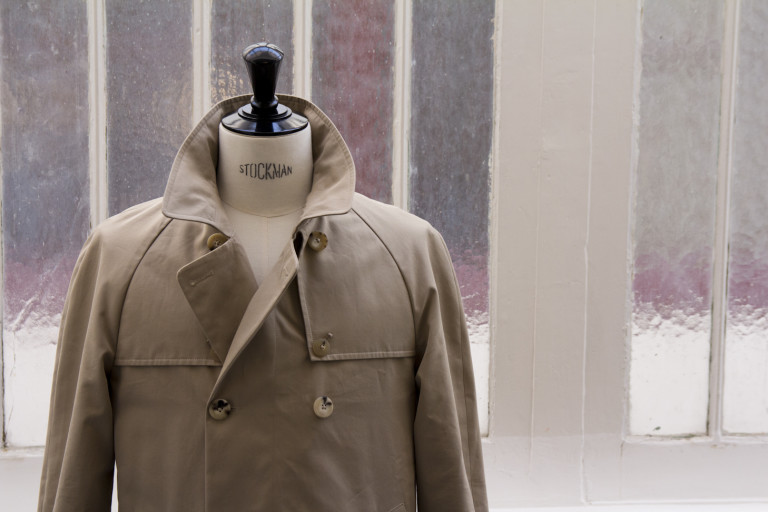 Where do you get your inspiration from?
The traditional male wardrobe, the clothes my father wore, vintage shops, an outfit I spotted in the street – all these trigger my imagination and inspire me to adapt them.

I also find inspiration in 60s films. For instance, Jean-Claude Brialy’s shirt in Eric Rohmer’s “Claire’s Knee” was the inspiration behind a new Edition 7 model.

And I’m always immersed in fabrics.

What can we expect from your new collection?
There’s a new denim twist on the Mac jacket. There are also Japanese cotton shirts. Another flagship piece will be a deconstructed seersucker suit. I work a lot on the finishes: unlined, buttons attached with a cross stitch, linen and wool sweater, etc. I love mixing textures, marls, piqué fabrics.

I love when you get a particular vision of a garment from afar and then you see the fabric details when you get close up.

What do you love about Heschung?
The things I particularly like are the company’s history, its know-how, authenticity and family tradition, the quality of its shoes and its workshops in Steinbourg. I also love its elegant modern take on the mountain boot which has not lost any of its traditional roots but can be worn with a contemporary wardrobe. I feel like we share the same values and the same philosophy. It is a vital connection for me, an important collaboration.
Your shoes are the perfect finishing touch for my outfits and my outfits are the natural choice to go with your shoes.

How do you view our collaboration?
It is really great to have a place in your showroom because we are two complementary brands. The Heschung customer can complete his purchase with an item of our clothing and vice versa.

What is your favourite Heschung shoe?
The Ginkgo! This is your iconic shoe which bridges the gap between your roots and contemporary style. It embodies the very heart of the brand.